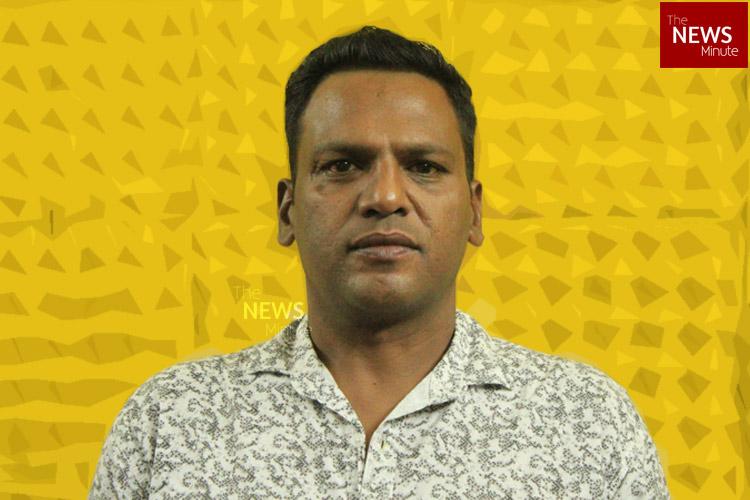 “I was told I was going to Mumbai. The next thing I knew, I was in an airplane, seeing snow outside,” says Wazulu, recounting the fateful day in 1989. Originally from Bengaluru, the 42-year-old was adopted by an American couple that year. 12-years-old then, he had been living at an orphanage in Bengaluru.

Wazulu lived in Portland, Oregon, for about two decades. But the life he had built was cruelly snatched away in 2010, when he was suddenly deported to India with no explanation why. Wazulu was a green card holder, and also had a passport, both were taken away from him.

For the past nine years, Wazulu has been living in India without any ID proof. Only recently he has come to acquire his birth certificate, his biological parents’ death certificates, and his adoption decree, which shows he was renamed ‘Vasulu James Redmond’ from ‘Srinivasulu’ by his American adoptive parents. He refers to himself as Wazulu, which is the name he uses as a music artist.

From a fairly comfortable life in Portland, Wazulu was forced overnight to live a hand to mouth existence. However, his is not an isolated case. Adoptee deportation has affected thousands of people, most of them originally from third world countries. They have grown up believing they are Americans, until one day they are sent back to their country of birth, which, for all practical purposes is a foreign land to them.

What is adoptee deportation?

Adoptee deportation became a big issue after the Child Citizenship Act (CCA) took effect in the US in 2001. While recognising that citizenship rights should be conferred on children adopted from overseas by Americansautomatically, the Act left out adoptees born before February 21, 1983 (those over 18 years in 2001) and those without Permanent Resident Status.

And though the Adoptee Citizenship Act was proposed in 2015 for retroactively granting citizenship to intercountry adoptees of American couples, it has been stalled. Till it is passed, many adoptees remain at risk.

Wazulu’s parents died in 1980 within a few weeks of each other when he was three. While his three sisters were put in the care of relatives, Wazulu was given up to Child Fund Association in Jayanagar in 1986 due to his grandmother’s inability to care for him.

In 1989, Holt International, an adoption agency, facilitated his adoption by an American couple who lived in Kansas. Wazulu ran away from them because the couple was allegedly racist, and made him do physical labour at their farm. In 1990, he was adopted by the Redmonds, again through Holt. However, his adoptive father allegedly molested him, causing him to run away when he was 16.

Wazulu eventually started making music in the late 1990s – hip hop with a touch of Indian musical styles – and enjoyed some success. “I suffered in America but I made it there, with music,” he says, a hint of pride on his face.

In 2010, Wazulu was returning from Costa Rica to the US after playing a show. When he arrived in the US however, he was told to step aside by the ICE (US Immigration and Customs Enforcement) officials. “Then they told me, you are not a citizen here. You are coming into the country illegally.  I was shocked! I went to Waluga Junior High, Lincoln High School, Portland State University… what do you mean I am not a citizen here?” he says vehemently.

Wazulu says he was kept in a lockup for two months after this incident. “There were real gangsters and criminals there. And I stood out, with my brown skin. I was scared for my life.”

And so, when he was pressured into giving up his green card and go back to India as the only way to get out of the prison, he complied. In February 2010, Wazulu arrived in Bengaluru with just $20 and no documents.

“I live day by day. I can’t, and don’t think about tomorrow,” Wazulu says simply, when asked how he has managed all these years. Sometimes, he collaborated with some of his musician friends who visited India and earned sustenance by making music. But for the most part, Wazulu has had no fixed abode, no fixed income. He has done odd jobs, and travelled to several states for work, but only via bus or unreserved coaches in trains, where they didn’t check ID.

Wazulu had been travelling in and out of the US earlier for music shows; he had even come to India several times, reconnecting with his sisters in Bengaluru, helping them out financially. He has no idea what went wrong in 2010.

He has since gotten in touch with Against Child Trafficking (ACT), and organisation working to stop inter-country adoption, as well as Adoptee Rights Campaign (ARC), one of the few organisations working for the rights of adoptees deported from the US, who are trying to figure out how best to help him.

A miscarriage of justice

Sung Cho, Communications Coordinator at ARC, became acquainted with Wazulu’s case two years ago. In his statement to ARC then, Wazulu had admitted that he had two charges of misdemeanour against him for shoplifting food between 1996 and 1998.

And while a green card holder cannot be deported for misdemeanour, Arun Dohle, co-founder of ACT says that two charges of misdemeanour could potentially be interpreted as aggravated felony. However, Wazulu says that he already paid the fine for those charges, and did community service as well. It is unclear whether that could have been a reason for deportation 12 years later.

The question remains – should a country simply uproot a person, who had no say in being brought there, and has lived there believing he is a citizen, without any explanation whatsoever?

“We don’t know what happened with Wazulu in 2010,” Sung says. “Perhaps he did not have the right documentation under CCA; perhaps it the prejudice against immigrants in the aftermath of 9/11 or an issue with how the bureaucracy handled his case. In any case, this was a gross miscarriage of justice.”

“These children did not have a choice in being brought here or being adopted. When they grow up and become adults, they suffer consequences for other people’s, and the governments’ mistakes. And they don’t realise what’s going on until they get into some legal trouble,” Sung argues.

He too is an affected adoptee, who realised that he was not naturalised when we went to get his Social Security card in the US. “The problem is that people don’t know that they need additional documents. In many cases, the proper adoption processes and documentation were not ensured by agencies and officials,” Sung says.

Wazulu says that he had been trying to get in touch with Holt International to get his documents for six years before they finally responded. Incidentally, Holt International’s operations were suspended in India after the Sherin Mathews case which grabbed international attention in January 2018. The three-year-old was adopted through the agency by Keralite parents in Texas, and was found to have died of homicidal violence.

TNM tried getting in touch with Holt, but did not receive a response.

Arun says that ideally, the adoption agencies should ensure proper documentation either through adoptive parents, or inform adoptees when they turn 18. “Even the Indian courts, which allow for a child’s adoption by overseas parent(s), sometimes do not check if the child is doing okay. National governments are complacent if nothing else,” he adds.

“I lost my parents, I was taken to America. I did not have a say then, I didn’t have a say now,” Wazulu says. “I don’t want any other child to go through what I did, which is why I am still trying. I have my older documents but I don’t know how much they will help. All I know is that I want to get my passport, and go back.”