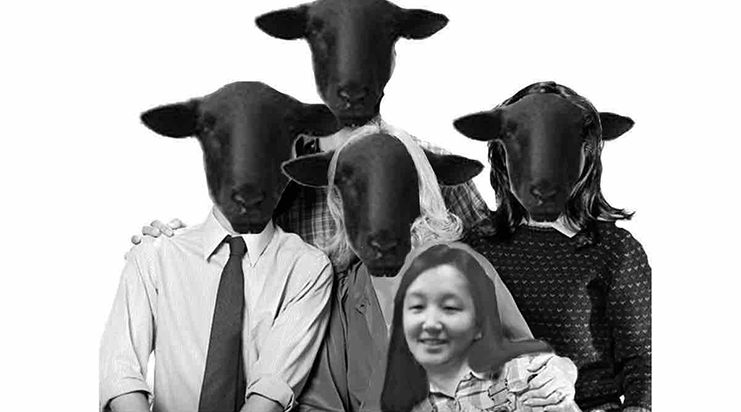 Heidi Park was adopted from South Korea and was raised by a white family in rural Minnesota. In rural Minnesota, participating in 4H is a rite of passage. When she was seven, she followed in the footsteps of her siblings and started showing sheep.

“It was like sports. It’s very addictive to win something, especially when no one who looks like you is there for you, and you’re the only person of color doing something so inherent to white culture,” Park said. “I have a strange affection for that time – even though I really hated doing it.”

For Park, that experience sums up the complex emotions that went along with being so different from the community around her. It’s one of the three set pieces of her play Black Sheep, which runs from May 2-6 at 18th & Union, an arts space.

In Black Sheep, Park tells the story of how she went from always being the odd person out to finding a sense of belonging. After the play opens at the Minnesota State Fair, it takes us to South Korea, where Park lived for two years and searched for her birth family, and then to Seattle, where she still lives.

Park’s decision to turn her experience into a play began with a desire to work with her friend, playwright Seayoung Yim. Park had edited parts of Yim’s play Do It for Umma, which gave her a taste of what it’s like to work on a script. Later, they talked about doing something together about Korea – what it means to be Korean American and who fits that definition – which led Park to write Black Sheep. Yim is advising on the play as dramaturg.

Park wrote in a journal every day during her two years living in South Korea. While those journals allowed her to think through her feelings, it’s been a different creative experience writing work for others to see and being held accountable by Yim, who has pushed her to keep going when it might have been easy to get sidetracked.

For transracial adoptees, it can be especially difficult to be as creative as you want to be – especially when it comes to your identity. Growing up, adoptees are often told they should only feel grateful for their adoption. Many aren’t given the tools or words to process the feeling of loss that comes with being separated from their birth parents and birth culture. Expressing that pain can feel like a transgression.

“I just decided to write for me and not for my Korean mom, my parents, for anyone else,” Park said of her experience writing Black Sheep. “I finally get to have my own time and my own space with my own friends – with me telling it in the way I want to. I get to be selfish and not feel like I have to defer all the time on how I’m feeling.”

To further explore these themes, the opening night will feature a panel with Korean adoptees who have done a birth family search, while the closing night will include a Q&A with Park and other creative minds behind the play.

For Park, it was a requirement that they find an adoptee for the central role. Korean adoptee Aimee Decker, who has performed with local theater companies SIS Productions, Ghost Light Theatricals, Theater Schmeater and MAP Theatre, will play her.

Park has spent her time in Seattle serving the community in a range of volunteer and professional roles, including API community organizer for the Win/Win network, community liaison for Rep. Jim McDermott, and member of the Asian Pacific Islander Americans for Civic Engagement PAC, OneAmerica Votes Federal PAC, and Historic South Downtown boards.

She has shown up for the community, and they are showing up for her. Last month Black Sheep’s executive producer Jamie Lee started a GoFundMe campaign to fund the play, setting a $3,000 goal. They met that goal in under two days and exceeded it, raising $4,370 to date from 92 donors.

“When you are willing to put yourself out there and there are people who are voluntarily willing to go see you speak your truth, it’s pretty mind-blowing,” Park said. “Hopefully it will be funny and will highlight a lot of common themes for people who feel they are different – that they’re not white, that they stick out.”

Now Park is bracing for the performance, when her heart will be on stage for all to see: “It’s like exposure therapy: ‘OK you’re out there now! Get used to it.’ Shame has less control of me.”

Black Sheep plays at the 18th and Union Art Space Thursday through Monday, May 2-6 at 7:30 PM. Tickets are available at https://18thandunion.org/black-sheep.