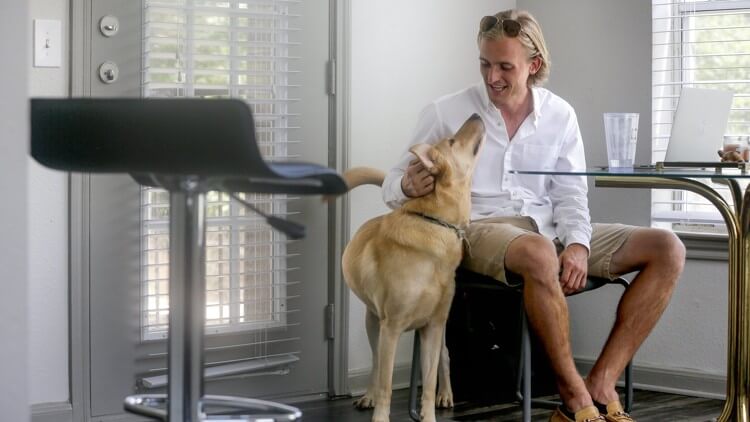 When he was 11, Lougheed, who was living in an orphanage in Russia, was selected to visit the United States for two weeks to perform in Ann Arbor, Mich., with a folk singing group of orphans from his area. During one of those performances in 2004, Lougheed met two strangers who would later become his adoptive parents and bring him to the United States for good.

“It was culture shock on every single level,” said Lougheed, who knew little English when the adoption occurred. “The only way I could communicate with my parents was through a paper dictionary, that and Google Translate. Imagine you’re trying to communicate a sentence and you just have a keyword and hope they get the rest. There can be a lot of miscommunication that happens. My parents and I will laugh about it now.”

But although it may sound like a “Cinderella” story, Lougheed’s adoptive journey is rooted in tragedy and filled with ups and downs along the way. A few years ago, he decided to share his story — the good and the bad — in a blog post online and found that it created a ripple effect for other adoptees and former foster children around the world who, in turn, wanted to share their stories with him. As a result, the now-Austinite created “Overcoming Odds,” a website and podcast that serves as a forum for adoptees and former foster youths to share their experiences in their own words.

“As people started to contact me more and more, a lightbulb clicked,” said Lougheed, 25. “This has to be a platform where people can be heard and develop that courage to share their own story. … My whole vision behind all of this was to tell the truth, don’t hide any facts. If the experiences are horrific, so be it. If they are success stories, let it be that.”

Lougheed said he was born in Russia to an alcoholic mother — he never knew his biological father — who couldn’t provide for his basic needs. For his first few years, he lived with his sister, who was 18 years older and struggled to provide for the two of them. Some days, there was just one bowl of food to share.

“She tried (to raise me), but it was extremely difficult,” he said.

At age 9, enticed by promises of toys and new friends, Lougheed voluntarily entered an orphanage that he hoped would bring him a better life.

Instead, he said he discovered a place where toys were locked up and used as motivators and where staff encouraged older children to beat younger children who got out of line. Sometimes, he’d climb on the windowsill in his room and write poems in the moonlight as an escape from the desolation.

Eventually, folk singing became another escape — and Lougheed’s ticket to the United States, where he’d spend his teen years trying to get a better understanding of a completely different culture.

“Almost everything was surprising,” he said. “Even the way that people interact is entirely different, the tone that people use. Here a typical conversation is very calm and mellow. In Russia, the way the language is, it’s very expressive. You think they’re screaming but they’re just saying, ‘Hi, how are you?’”

Lougheed, whose biological mother died soon after his adoption, graduated from Kent State University with a degree in Russian translation and has kept in touch with his sister, who is still in Russia. After college, he worked in Delaware before moving to Austin, where he transformed his idea for “Overcoming Odds” into reality.

“I asked myself this question: ‘Why me? Why did you have to go through all that stuff in Russia and challenges here?’ At the time the answer was very complex, but I look at it now like, ‘If it’s not you, then who else?’”

Lougheed, who no longer participates in folk singing but does still write poetry, has become well connected in the Austin community and is able to make a living through “Overcoming Odds” thanks to donations, sponsorships and well-timed connections. Peter Strople, a businessman who created a group called Friends of Peter that connects business and community leaders to help spark change, said Lougheed made an instant impact on him.

“He was so focused from the very beginning that this is where his life mission was going to be,” Strople said. “I was blown away.”

For Strople, who helped make some key strategic introductions for Lougheed, the mission of “Overcoming Odds” was also personal — Strople, too, was adopted.

“I had three different names before I was 3 years old,” Strople said. “You think adoption is something everybody knows about, but most people don’t know the first thing about adoption.”

Lesli Johnson, a Los Angeles-based marriage and family therapist who was adopted as a baby, said she, too, was inspired by Lougheed to share her personal story.

“We’re at a point the last few years where the adoptee voice is really being heard, and people outside of the foster and adoption community are wanting to hear from the adoption perspective,” said Johnson, who also shared her story on “Overcoming Odds.” “There are a lot of sites and organizations where people take really strong opinions one way or the other. This is a site that’s very adoptee-centric but also very approachable and educational.”

Johnson and Strople will be among the speakers during a June 23 event hosted by “Overcoming Odds” called Hear Me Now that will also include workshops and networking. It’s centered on the foster and adoption experience but open to anyone.