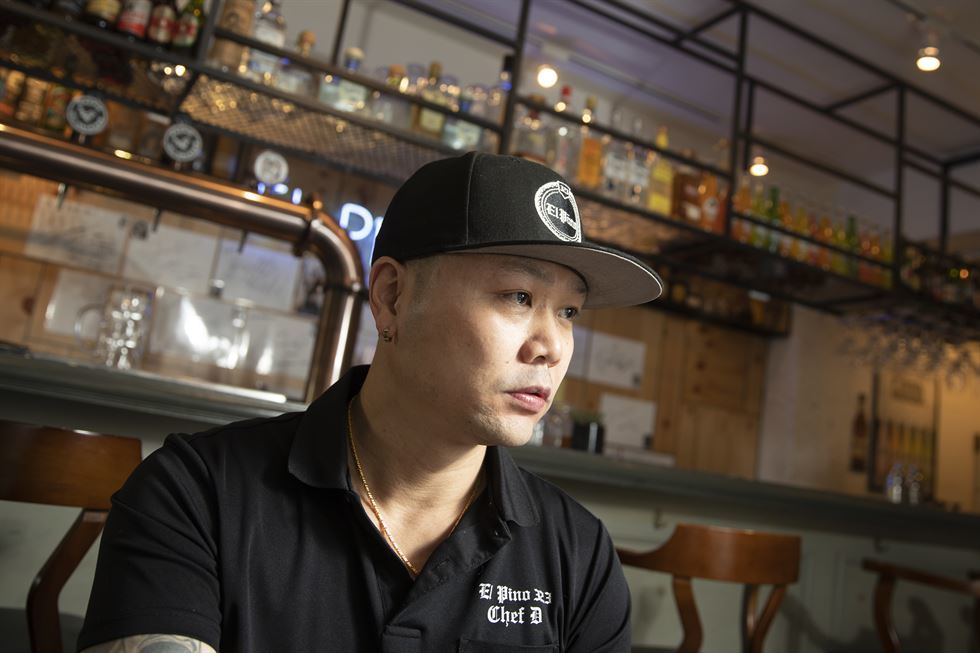 Shops in the Gyeongnidan area in Itaewon, Seoul, have been closing down one after another as tenants face tough times.

The 55,000 square meter area from the military finance corps to the Grand Hyatt Hotel was once a vibrant, crowded district.

Owing to the cosmopolitan nature of the neighborhood, craft beer, interesting stores and foreign eateries popped up and attracted younger people seeking a trendy lifestyle.

The booming days for Gyeongnidan, however, later became a curse for tenants. Rents began spiking in the district from 2010 because of the rise in its popularity.

Unable to pay soaring rents, tenants left Gyeongnidan one after another, looking for cheaper locations for their businesses.

There is, however, one eatery that has defied such trends ― El Pino 323. The Mexican restaurant is owned by Korean-American adoptee Christian Morales, better known by his nickname “Chef D” among Mexican food lovers.

The eatery has continued to thrive since it relocated there two years ago from Seoul’s western district of Mapo.

Chef D attributed the success to his “ethical food.”

“In El Pino, we have a lot of rules. I am very strict with my food,” he said during a Korea Times interview at the restaurant Wednesday.

According to him, some of his customers ask him to change recipes a little bit or remove certain ingredients for them, a request which he said is unacceptable.

The name of the restaurant came from East Los Angeles where he was raised.

El Pino is a natural landmark of East L.A. sitting on its border with the Boyle Heights neighborhood on the corner of Folsom and N Indiana. The number 323 is the area code of L.A.

Chef D cannot go back to East L.A. In 2002, he was deported to South Korea and his entry to the United States was banned for life after being caught selling drugs.

El Pino 323 signifies his cultural roots. He learned how to cook Mexican cuisine from his grandmother Rosa Maria Morales who ran a restaurant in the backyard of her home in Puebla, Mexico. In East L.A., Chef D was raised as a Mexican child.

He said his food doesn’t represent a certain region or location in Mexico. “If it does, it’s actually Puebla, Mexico where my grandma was from,” he said.

His uncompromising spirit and stubborn policy made him a controversial character ― there are Chef D fanatics and at the same time haters.

Those who respect genuine Mexican food admire him for his authentic recipes and come to the restaurant again, but people who unsuccessfully requested a recipe alteration harbor hard feelings toward Chef D.

“Some people actually appreciate what we do… But some people whose personal request was not accepted give us a lot of bad reviews.”

He said the past six months or so were particularly tough for him because some expats uploaded negative reviews about his food on social media. Some bashed him on the internet, according to the chef.

Such bashing, however, didn’t lead him to change his way of making authentic Mexican food.

“My wife took the criticism personally and one day she told me I should change my recipes.” He refused.

Chef D uses locally-grown vegetables but imports key ingredients, such as beans, peppers, and sauces, from the United States or Mexico to give his food an authentic flavor and taste.

His hard work and work ethic paid off.

“Our popularity is growing. With that, we got some people who hate us, though” he said. “The funny thing is everybody is trying to be like us now. I mean Mexican restaurants in Korea are trying to be authentic.”

Chef D and his wife plan to expand their business. He has Busan in mind as the location for the second El Pino 323 restaurant, but his wife prefers Pyeongtaek, Geyonggi Province ― a city with a huge U.S. military base. “Her opinion matters. But it’s my money. In the end, I’m going to make the decision,” he said.

His nickname reflects his turbulent childhood. D stands for “diablo” or the devil. When he was young, his grandma called him that because she thought he was a troubled kid.

Although he initially called himself Chef D in reference to his grandmother’s words, the initial also stands for his Korean name ― Dong-wha.

Born in Busan’s beachfront district Gwangalli in 1979, he and his two sisters were put up for adoption. He and his sisters spent their childhoods and young adult years in the Boyle Heights, an area predominantly inhabited by Mexicans. In the 1980s, the Boyle Heights was very dangerous.

He and his sisters were raised by a Mexican grandma ― their third family after two American families abandoned them.

Chef D was a defiant kid who was not afraid to stand up for himself and his sisters. He was sent to juvenile prison after seriously hurting his foster father. After being released three years later, he became a gang member and sold drugs for money.

He said his grandma didn’t have enough money to support him and his siblings, so he needed money to raise his baby sister who later died of leukemia.

He was caught and deported to South Korea in 2002.

After arriving in Korea, Chef D went down to Busan to see his hometown and spent several years there. He taught English at a private academy, partied at night and drank a lot.

He met his wife in 2005 at a hospital in Busan. He was an alcoholic and his wife was an intern. Chef D said his wife was the only one who spoke English at the hospital and she visited him every day, saying this was how their relationship began. They have been married for 12 years.

The couple came to Seoul seven years ago. Chef D said he wanted to open a Mexican restaurant and did lots of pop ups to find investors. After years of endeavor, he eventually found two investors who financed his opening of El Pino 323.

Chef D said his grandma, who died of natural causes many years ago, was the inspiration of his food. She taught him how to cook Mexican food when he was seven years old. She recognized that he had a lot of talent when it came to cooking. “My grandma was tough but she was very loving,” said Chef D. “Everything I learned is from my grandma.”

Recently he started teaching a charity cooking class to help Korean orphans. He said he would continue to give back to society to help those in need.