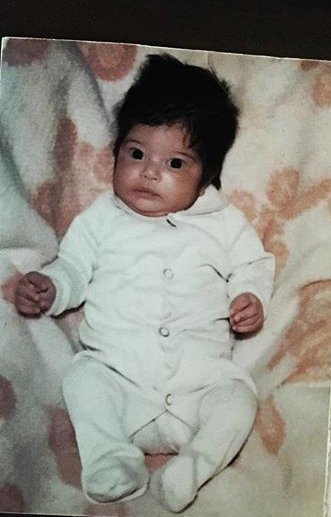 Twenty-six years ago, a well-intentioned white couple adopted a baby from Bogota, Colombia. However, it wasn’t until the baby was 19 years old that she discovered that fact.

You see, my parents decided that they were going to approach my adoption as if they were completely colorblind, despite the fact that we are not the same race.

My brother was also adopted from Colombia, but we were both told that we were Italian and Portuguese, just like our adoptive parents. Your parents’ word is gold when you’re a child; at least that’s the best explanation I have for how my parents successfully passed me off as a dark-skinned Italian for 19 years of my life.

Of course, during those years I asked them time and again. “Mom, why is my skin darker?” or “Why wasn’t I born in America?”

They always had answers. I was told that my great-grandparents had skin darker than mine, but black-and-white photos didn’t show it well. That my parents went on vacation and unexpectedly had me in Colombia.

I didn’t know any better. We couldn’t just Google things on our smartphones in the ’90s.

When I was a little girl in elementary school, I was the darkest girl in my class. We were all hanging out during free play during second grade when a little blonde in a pink dress came up to me and shoved me. “You can’t play with us! You’re black!” she yelled. I was stunned, and simply just stood there in silence.

I looked down at my brown skin, and didn’t know what to say. It wasn’t the first time something like this happened and unfortunately, it wouldn’t be the last. She knew I didn’t quite belong.

Throughout my childhood, I was surrounded by 99-percent white students, in a white middle-class neighborhood, in my white family. The only brown people I really saw were, well ― nobody. I knew I was brown, but so was my brother, right? And apparently so was my great grandpa? I fit in, OK? I was just like everyone else!

As I hit puberty, everyone assumed I was Latina, but I denied it.

“I’m sorry, I don’t speak Spanish. I’m Italian,” I would say over and over.

When I was 14, I found part of my brother’s paperwork stating that he was adopted. I searched all over the house, but my paperwork consisted of a birth certificate with my parents’ names on it and my Social Security card. No adoption paperwork in sight.

In a further exercise in lying to myself, I decided that while my brother was clearly adopted, I wasn’t. After all, he was even darker than me. And everyone always said I looked like my dad, but he didn’t. With so many excuses and so many lies already swirling around, it was simple enough to just ignore the problem.

I knew something was off, but I couldn’t admit it. It hurt too much to acknowledge that my entire life was a lie. Not only that, but my family had always said negative things about my people from my culture ― Latinos only did yard work, they were uneducated, and other stereotypes. As a child, I wasn’t allowed to hang out with other Latinos ― maybe they feared I would find out my true nationality.

Finally, at 19, I found the rest of my brother’s adoption paperwork in my dad’s office. It clearly referred to “their adopted daughter, Melissa …” It was there smack-dab in my face, in black and white, and I couldn’t hide from it anymore.

I was adopted from Colombia, just like my brother.

So, I confronted my mother. Calmly. At the moment, I just needed answers. There weren’t many forthcoming.

The way my mother was raised, it was ingrained into her that to be a good wife you needed to bear kids. She was ashamed about not being able to conceive, and back then, you didn’t speak of these things. My father, on the other hand, just went along with what my mother did. When I confronted him, he said that he promised himself that he would tell me if I asked. To him, it was that simple.

As an adopted child, I lost my birth parents, but because of my parents’ actions, I also lost my country, my language and my culture.

I didn’t talk to them for a long time. I grieved. I raged. I went to therapy. I harbored a lot of resentment for my parents, who I blamed for depriving me of my culture.

When you bring a child of a different race into a home, it’s hard to face certain realities. My white parents decided to teach colorblindness to try to protect themselves and me from racism in the world. But, instead, it taught me that my ethnicity was something to be ashamed of. It was something to be hidden.

However, after hearing so many of my fellow adoptees’ stories, I know that my reality is not so different from theirs. I’ve been in touch with hundreds of transracial adoptees all over the world, and a lot of us feel that we do not belong fully in either culture, our birth family, or our adoptive family.

My case is extreme, but not unique.

So, many international adoptees have parents who make subtle comments about how horrible their child’s country is, dismiss talk of their birth parents, give them dirty looks if they talk in their birth tongue. Small things like this can have a big toll on an adoptee’s mental health and, despite the love parents may have for their children, it does not make these behaviors less damaging.

I have loving parents regardless of what they did. And yeah, we still have our issues, but we’re making it through. Today, they listen to me when I talk about racism. They have stopped using stereotypes. They try to integrate Colombian food into holidays and talk about my adoption openly. They listen to me and understand that it’s a process that I am still working through, and that even though I forgive them, it doesn’t erase the hurt their actions have caused.

But there is still work to do. I still have to bridge the mental gap between the cultures in my life. In time, I hope to learn how to integrate them more because your skin color is power. Your culture is power. Your language is power. Your ethnicity is power.

Maybe one day it will get easier, but for now, at least, I’m celebrating my heritage. And maybe my story will help other families learn to celebrate every part of their children’s identity.