Growing up, Brooke Thiele spurned her mother’s attempts to connect her with Korean culture, like cooking bulgogi beef or buying her a traditional Hanbok dress.

She just wanted to fit in.

Thiele’s doll had black hair, but she wanted the same Raggedy Ann doll with red locks that everyone else had. She was the only person of Asian descent in her school in Pulaski until sophomore year.

In childhood photos, her black hair stands out among her three blond brothers.

Born in Daegu, South Korea, Thiele was adopted by a white Green Bay family when she was 9 months old. Her brothers are biological children of her parents.

Thiele remembers watching eggs hatch with her brothers at home.

“You know, that was you,” her brothers would tease. They would joke that Thiele was shipped from Korea as an egg in a box full of snakes and spiders.

Brooke Thiele and her brothers — Brad, Matt and Jason — at the family’s home in Green Bay. Thiele was transracially adopted as an infant and is exploring that experience through her art. (Photo: Submitted photo)

But for the last year and a half Thiele, 39, has been exploring her Korean heritage. She started growing her own radishes and making kimchi. She’s learning Korean by watching videos on YouTube. She wants to study Pansori, a traditional Korean form of musical storytelling.

Earlier this year, Thiele was awarded a prestigious Mary L. Nohl Fellowship in the emerging artist category. She is using the $10,000 grant to work on a project exploring her transracial adoption. Surprisingly, another one of this year’s Nohl fellows, Rose Curley, is working on a graphic memoir about being transracially adopted and growing up in Milwaukee.

Thiele and Curley are part of a boom in identity-based art, work in which the creator’s identity is central.

Polly Morris, who administers the Nohl fellowship program, said the vast majority of applications this year were from people who address identity pretty overtly.

“I remember even three or four years ago jurors saying, ‘Oh identity work is so ’90s,’ ” Morris said. “Now, you can see it’s come back into the realm of acceptable.”

Curley and Thiele were selected for two of this year’s five Nohl fellowships by out-of-state jurors independently, based on the quality of their work. The process was far along when jurors realized the women were addressing a similar topic. However, their experiences and their approaches to making art about their adoptions differ. Thiele’s art is metaphorical, Curley’s more explicit.

For Thiele, addressing her adoption story marks a shift in her artwork. Her previous project, an experimental film called “The Deer Queen,” was unrelated to her Korean background.

She said it’s time for her to reflect on her Korean-American identity and different views she’s had about it.

“A lot of people think like, ‘Oh, you won the lottery. You got rich parents and they got a daughter. Otherwise, you’d be dead or you’d be a prostitute in Korea,’ ” Thiele said. “My story isn’t all sugar and honey.”

For decades, South Korea was the most prolific country sending children in need of homes for adoption around the world. Korean adoption was initially framed as a humanitarian project in the 1950s and adoptees were often viewed as recipients of charity.

But adoptees who emerge as artists and academics often challenge the narrative that children are rescued through transnational adoption without potential for emotional trauma.

Oh Myo Kim, an assistant professor at Boston College, studies healing and resolution through the arts for adoptees as a way to express a multilayered, complex experience.

“We were told how ‘lucky’ we are and any questioning of this process is ‘ungrateful’ and no one wants to be the ‘angry adoptee,’ ” said Kim, who creates theater workshops for adoptees.

“Speaking for myself, academia and research provided an outlet to start creating space for the narratives of adoptee experiences and to legitimize those experiences,” Kim said. “In the arts, adoptees have also used their art as a platform … to expose more complex issues of loss and identity.”

For the Nohl Fellowship show in May, Thiele plans on creating traditional Korean Hanbok dresses with a series of images along the bottom, a zoetrope, that will animate when spinning to share her adoption story.

Curley, 26, was adopted domestically at birth and raised in Milwaukee. She is creating a graphic memoir about growing up with white parents who didn’t look like her.

She grew up in the Washington Heights neighborhood with her parents and younger brother who was also adopted. Curley went to Milwaukee public schools before going to Pius XI High School.

In the book, her journey begins with Curley making the decision to learn about race, racism and transracial adoption. Domestic adoption of black children by white families has been streaked with controversy.  Her memoir combines three timelines, with Curley, wearing a hoodie and working on the book, in the story. That’s Curley at 24, her age when she began the memoir, who is learning as the story progresses. Then there’s the child —Curley’s innocent self. The narration comes from her future self.

“This voice knows my fate, which is to become painfully aware of the fact that I am living in a racist society,” Curley said. 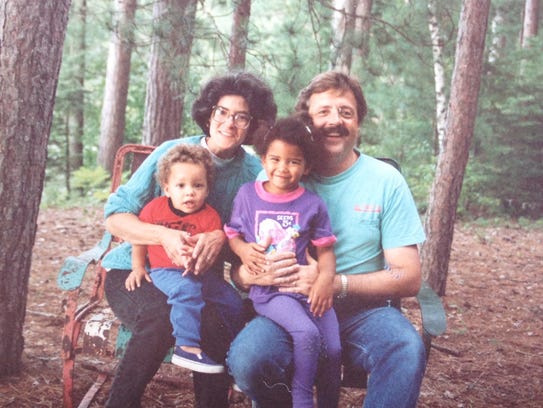 Rose Curley and her family outside their cabin in northern Wisconsin. Curley is working on a graphic memoir about being transracially adopted and growing up in Milwaukee. (Photo: Submitted photo)

Her exploration of self and race is addressed through the story.

“When you’re a kid you don’t really know what’s going on,” Curley said. “You have to figure it out.”

She reflects on realizing that strangers didn’t automatically know her association with her parents.

“You have to own your identity as your parents’ kids, which is not something that people with their biological parents typically have to do,” Curley said.

She started the memoir while in graduate school for writing at the School of the Art Institute of Chicago. She graduated in spring 2015. She earned a bachelor’s degree from Rhode Island School of Design in 2012.

Right now, Curley’s writing and drawing from her childhood bedroom in her parent’s home in Washington Heights. It’s meaningful for her to work on the book in Milwaukee where many of the scenes in her narrative take place.

Curley’s awareness of race heightened working on this book. Some of that comes from current events like the police shooting of Michael Brown and the protests in Ferguson, Mo. Those news events are included in the book as inciting incidents in the story line.

“I know now that even though race shouldn’t matter, it does,” she said. “And as long as we live in a racist society, race is going to matter.”