For our first interview, we share with you the thoughts of Dottie Enrico, Group I participant.  All of the participants of this first group were adoptees who were of mixed race; only their birthmothers were of Korean origin.  We call them our ‘First Wavers’… 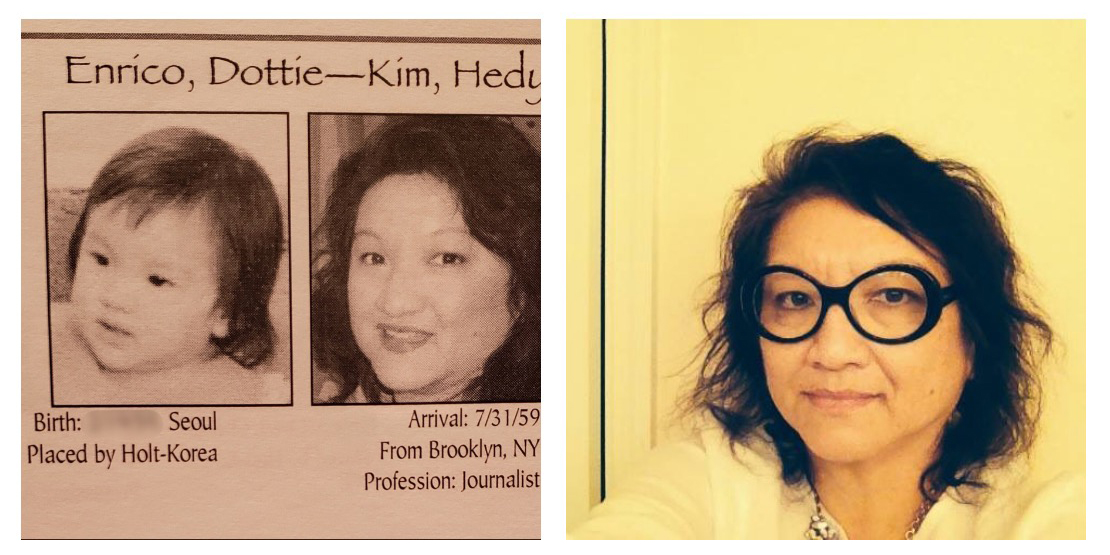 How do you identify yourself?
DE: female

Where were you adopted from, when and about how old were you?
DE: Holt, I arrived in the U.S. at the age of 7 months in August 1959.

Would you share if you know information or remember any aspects of the life you lived before adoption?
DE: I do not remember anything.

Where did you grow up and where do you live now?
DE: I grew up in Seal Beach, CA, Littleton, CO and Brazil, IN. I now live on Martha’s Vineyard, an island off Cape Cod in Massachusetts

What is/was your profession?
DE: I was a newspaper journalist and an advertising executive

How did you learn about The Gathering? What compelled you to attend? Were there any expectations you had about the event?
DE: I learned about it through Holt. I was compelled to attend because I wanted to meet and connect with other Korean adoptees. I expected the event would be warm and affirmative.

What memory remains with you of this event?
DE: I had never been in a place with so many people who looked like me and shared such an important part of my history.

Has there been any lasting impact of The Gathering in your life now?
DE: I adopted a child from Korea through Holt. It has been gratifying and helpful to be able to reflect on the wide variety of experiences my fellow adoptees had growing up. I’ve often referred to these (experiences) as I’ve parented my daughter, Eleanor.

How have your thoughts on being adopted changed or evolved over the last 20 years?
DE: Very much so since I am raising a daughter adopted from Korea and I also have a birth child. The ability to understand how much I missed  in those early days when Eleanor was in Korea were really highlighted when I had a birth child, Max. I remember counting the number of days when Max reached the age when my husband and I first met Eleanor. So much had happened in those five months. I could also contrast what it must have felt like for my own birth mother to carry me all those months then decide to leave me at Holt. I now understand that my adoption affected me in profound ways that I never recognized. I continue to learn and grow in this adoption journey. My attendance at the Gathering was an important part of understanding this experience.

I have found that being adopted and the way I privilege that part of myself has ebbed somewhat as I have gotten older with other aspects of self being more important, like being a parent.  Where does being adopted fit into your life these days?
DE: A few months ago I had a life-saving liver transplant. Without sounding loopy, I felt the presence of my birth mother and other dear friends who have passed during that procedure. Many of the basic existential questions: Why am I here? What is my purpose in life? were answered during my health crisis. I have a much deeper understanding of how much being adopted has affected my feelings of belonging in this world.

Are there any thoughts you have about the adoptee community then and/or now?
DE: I wish I had remained in closer contact with my fellow Korean adoptees, especially those “early ones” who are my age. This can be a dark journey at times, but ultimately most of us have emerged whole, happy and productive. I regret that I do not feel a stronger connection with other Korean adoptees. I read many of their stories from afar and admire so many of them.

What is going on in the adoption community you wish would get more air time?
DE: I think it would be interesting to explore how Korean adoptees experience different life milestones through the lens of adoption: getting married, giving birth to or adopting a child(ren), dealing with the death of a parent, divorcing, having a career/job, raising children, facing death and terminal illness.

I admire Glenn and Julie Morey (creators of the SidexSide Project) so much. Their work has brought Korean adoption to a whole new audience. I also have tremendous admiration for Thomas Park Clement and how much he has supported the Korean adoption experience. And of course, we all owe so much to Susan Soon-Keum Cox of Holt. She has dedicated her life to us and deserves our gratitude and respect. I would like to showcase the talents and contributions of all adoptees.

What is the best part of being an adoptee?
It has made me a more thoughtful and empathetic human being.

What is the hardest part of being an adoptee?
Never meeting any of my biological relatives

Is there something of the Korean culture you have incorporated into your daily life?
Hard work, respect for the elderly, eating sandwiches made with leaf lettuce “bread” and wrapping food in lettuce!

If you’ve been to Korea, please finish this sentence – Next time I go to Korea, I…..
Will take my daughter Eleanor to find–and hopefully–meet her birth parents.