The largest group of young adult Korean adoptees in 1999 were those born in the early 1970s.  Kathy Carney Sacco, from Group 4, shares her memories and thoughts of The Gathering and being adopted. Kathy was memorable to so many of us because she was expecting her first child at the event! 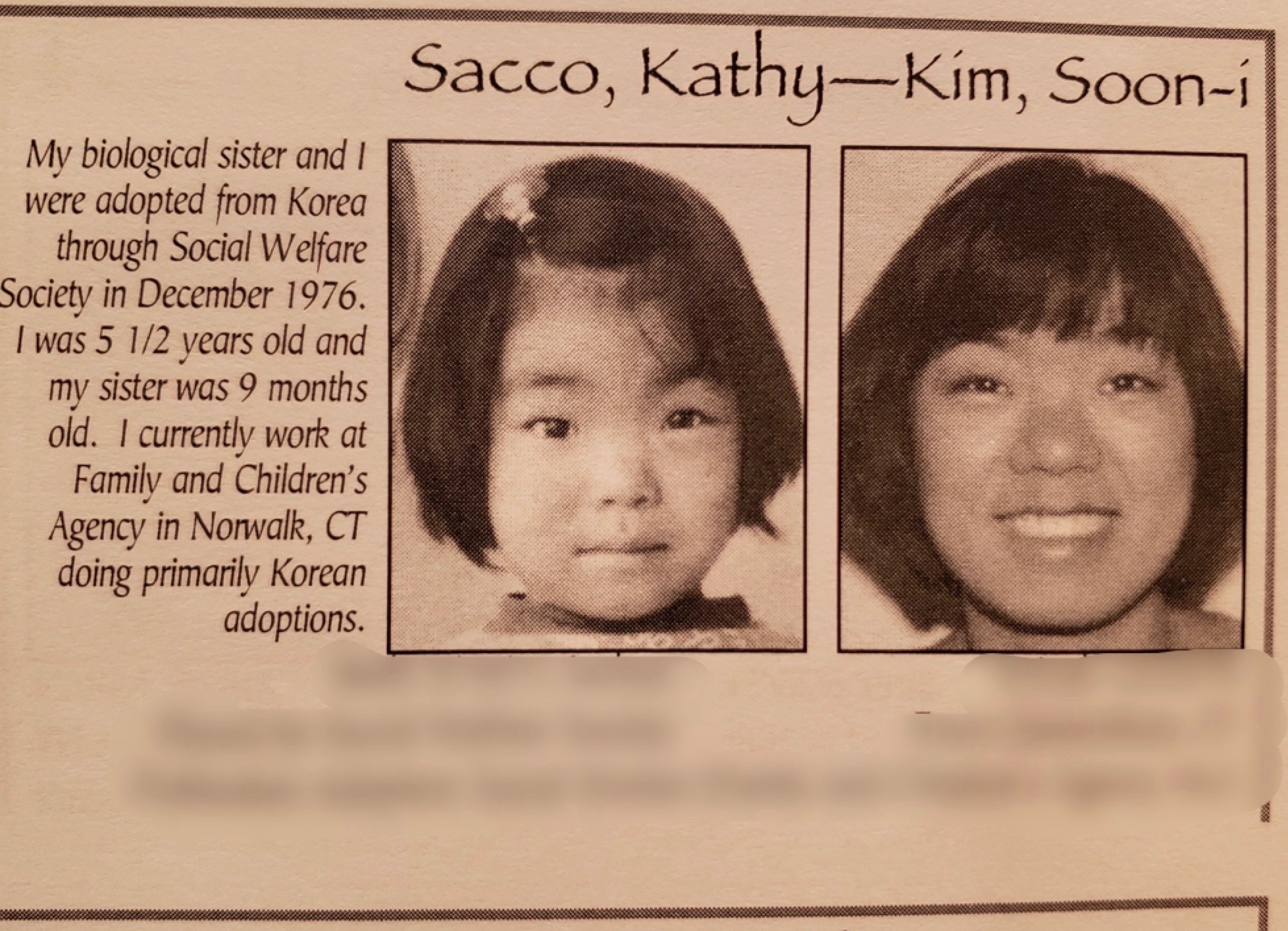 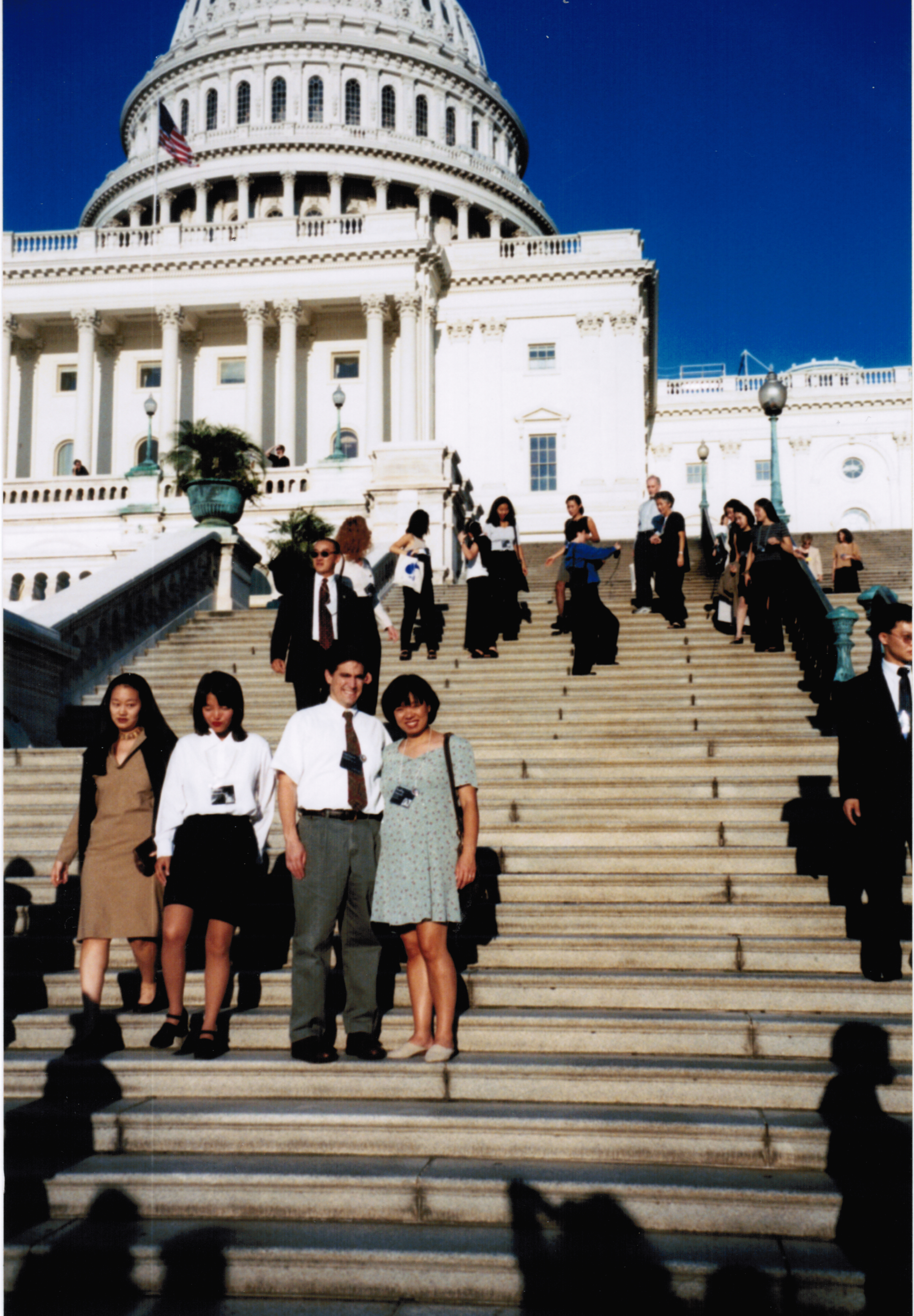 How do you identify yourself?: I always respond to people “I was adopted from Korea”

Would you share if you know information or remember any aspects of the life you lived before adoption?

Yes, I remembered a lot.

We were poor and raised in a two-room building made out of cinder blocks. Open spaces acted as windows, no running water and no bathroom.

I remember the village where I lived was next to a military base. There was a playground area where I would swing very high on a swing. I remember being taken to the orphanage in a cab and the subsequent foster home that we stayed in until coming to the United States.

We lived all over the United States due to my father’s job. We were generally in rural communities where my sister and I were the only Asians.

I learned about The Gathering through my job as an adoption social worker.  I connected to Susan Cox at Holt and connected to Also-Known-As.

Being in a room with 400 other Korean adoptees!!!

Also, I was six months pregnant with our first child.

The Gathering opened my eyes to the potential and power of our community. It also gave me indispensable friendships that began because of The Gathering.

Yes, my views are no longer black/white ie adoption is the best/worst solution. I worked in adoption practice for 11 years and then adoption policy for 8 years. Adoption is a solution for some children to have a permanent family. However, there needs to be strengthened policies and procedures that protect parents, families and children from fraud and corruption. We also need a comprehensive child welfare system that includes prevention and support of children and families from prenatal through college.

Adoption is a part of my identity. But I am currently glad to have a break as being part of my professional identity.

Are there any thoughts you have about the adoptee community then and/or now?

I am so glad to have the reflection of 20 years from The Gathering. As younger generations of intercountry adoptees are maturing, I hope they learn from history to not repeat our mistakes and re-invent the wheel.  I also hope earlier generations will be willing to mentor. It is in sharing our stories that things will be made better for ourselves and future generations.

Is there a conversation in adoption you would like to have more of?

How to support adoptees better in their search journeys

The need for post adoption services and need for counseling services

It’s hard to say what is the best part of being an adoptee. It’s just an inherent part of who I am. I know adoptees think about the loss of birth family and birth culture. I thought about those things too. But now as a middle-aged adult, I realize if I had not been adopted, I wouldn’t have my husband and daughters. I wouldn’t have my some of my closest friends if not for adoption.

As an intercountry and transracial adoptee, the hardest part of being an adoptee is being viewed as “other.” Sometimes I get tired of sticking out in my extended family and in the community as being one of the few Asians. It is also coming in full force again with the racist and xenophobic messaging of the current president.

Next time I go to Korea, I will: