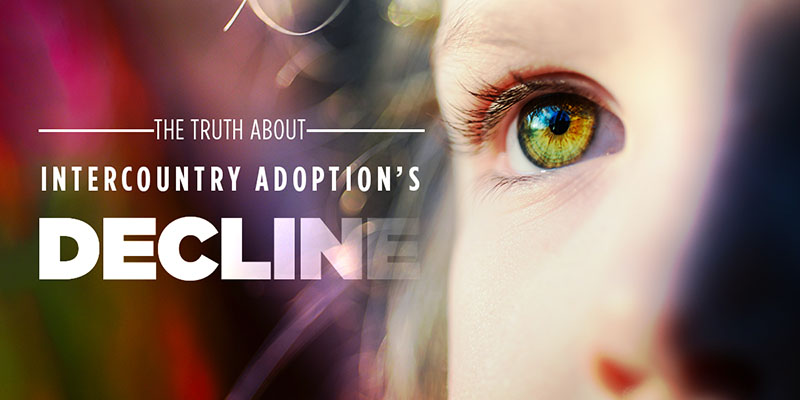 In a recent flurry of articles, the National Council for Adoption asserts that the State Department is responsible for the plummeting number of intercountry adoptions. They are wrong. In fact, nothing could be further from the truth.

There are a multitude of reasons international adoptions to the United States and all other receiving countries have declined. Foreign governments have moved, in many cases, to bolster their own child welfare programs. But as they make progress they have also become concerned about what they increasingly view as lax practices by U.S. adoption service providers (ASPs) and inadequate regulation by federal and state child welfare agencies.

The unfortunate practice of unregulated custody transfer, more commonly referred to as “rehoming,” has become the focus of major concern for sending countries, as well as the State Department. Guatemala, Cambodia, Ethiopia and Nepal have all closed their intercountry adoption programs due to concerns about child trafficking as well as rehoming and other questionable practices by ASPs. The U.S. Department of Justice has successfully prosecuted more than one ASP for criminal activity, but concerns remain.

Russian adoption is a particularly troublesome issue. Russian children have been overrepresented in child fatality and abuse statistics. In one notorious rehoming case, an American adoptive mother put her Russian adopted son on a flight back to Moscow with a one-way ticket.

Ultimately, Russia’s closure was out of the State Department’s hands when Russia chose to close intercountry adoptions in retaliation to U.S. Congress’ passage of the Magnitsky Act.

While individual states have struggled with the best path to end this dangerous practice, Congress is advancing a bill to clearly define rehoming as child endangerment to ensure consistent implementation across the country. The passage of the Safe Home Act sponsored by Rep. Jim Langevin, (D-R.I.), and Rep. Donald Bacon (R-Neb.) would send a strong message to foreign governments that the U.S. takes the safety and well-being of their children seriously.

There have been a number of high-profile fatalities of children adopted from other countries. Hyunsu O’Callahan from Korea, Sherin Matthews from India and Hana Williams from Ethiopia all died after careless home studies, lax supervision and non-existent or fraudulent post-placement reporting. Even one case like this is too many. But for sending countries, the aggregation of child fatality and near fatality data has resulted in serious and growing concerns. Foreign countries look to the United States for stronger, more consistent home study standards and more effective supervision.

Another challenge is that some countries, including South Korea, have made it clear that the failure of the U.S. government to ensure full citizenship for adoptees is unacceptable. The failure of the U.S. government to protect adoptees not covered by the Child Citizenship Act of 2000 has eroded confidence in the United States as a destination for their children. More than 50,000 adoptees who came to this country prior to the enactment of the bill are at risk of deportation. Unfortunately, the Adoptee Citizenship Act remains hostage to a process that confuses strengthening adoption policy with “weakening” immigration policy.

The causes of decline are not all bad, either. For many years, the State Department has led international efforts to promote ethical adoption standards around the world while these and other factors have driven numbers down. To a great extent, the decline in intercountry adoptions reflects changing practices in many countries from which Americans had historically adopted in great numbers. Domestic adoptions have increased in some countries like China, resulting in a decrease in international adoptions. This is a turn of events we should applaud and support, not simply view it through the eyes of frustrated American consumers of adoption services.

South Korea was the first country to send children to the United States for adoption and for many years sent the most children. However, in addition to South Korea’s concerns about adoptee citizenship and for a variety of other reasons, over the last few years that country has reduced the number of adoptions by 10 percent every year as they embrace more progressive child welfare practices. A number of high profile deportation cases involving Korean adoptees – one of whom, Philip Clay, committed suicide outside of a Korean government office – have galvanized Korea’s concerns about our failure to take care of important policy details for adoptees. Meanwhile, other countries are watching these dynamics and further hardening their positions about adoption to the United States.

While all of these trends have played out, the State Department has worked diligently on a number of fronts to ensure ethical, appropriate adoption practice. Their diplomatic efforts have resulted in the reopening of Vietnam and efforts continue elsewhere. American diplomats around the world continue to communicate with countries interested in progressive child welfare policy, domestic adoption and intercountry adoption when appropriate. The consensus among academic and diplomatic experts is clear, however, that regulation by other countries – not the U.S. State Department – has contributed to the decline.

As these longstanding concerns grow around the world, we are now confronted with another set of circumstances that continue to undermine, rather than foster confidence in the United States as a partner in intercountry adoption and child welfare. It is almost impossible to imagine the outrage of governments like Honduras, Guatemala, El Salvador and others who see firsthand the abuse of their children at our borders. The images of children in cages, babies sleeping on gravel under bridges and a deliberate family separation policy have done little to bolster confidence in our ability to ensure the safety, permanence and well-being of children from around the world who arrive here under various circumstances.

The notion that the State Department maintains “anti-adoption” policies that are “preventing Americans from becoming parents,” as the National Council for Adoption asserts, is both offensive and wrong. In fact, there are more than 100,000 American children legally free for adoption in the U.S. foster care system who would disagree as well. But as long as we ignore the real issues that have undermined intercountry adoption as a social practice, those problems will not be addressed.

The State Department’s efforts are a part of that solution. Congress must play a major role in addressing other concerns. Passage of bills to address unregulated custody transfers, adoptee citizenship, home study standards, post-placement supervision enforcement and the standing of border kids would go a long way toward building confidence with sending countries. In the meantime, the State Department can’t enforce policy that Congress does not generate.

Ambassador Susan Jacobs (ret.) was formerly the Special Advisor to the Office of Children’s Issues at the U.S. Department of State.

Maureen Flatley is a consultant specializing in adoption and child welfare policy.