In continuing our efforts to address wellness in the intercountry adoptee community, IAMAdoptee connects with Dan Matthews, musician, rapper, documentarian and creative.

Dan Matthews, DANakaDAN, is an alternative rap artist from Los Angeles, CA. As a Korean adoptee he’s produced several documentaries about the adoptee experience, as well as his very personal journey reuniting with his biological family, including an identical twin brother he never knew about.

You can find more on him online by following him at @DANakaDAN across social media. 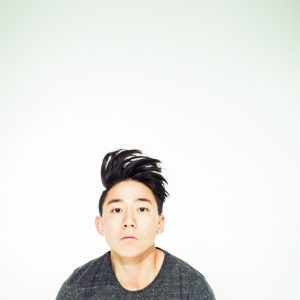 IAMAdoptee: Did your original interest in rap and hip-hop have any connection to adoption and/or mental health?

Dan: I would say they’re probably intertwined because I think, no matter what we do, everything stems from things that happened when we were younger. For me dealing with emotional issues when I was younger probably led me into doing music and arts and definitely led me into the stuff that I wanted to write about. So it’s tough to separate the two, but I wouldn’t say it was a direct link, like because I was adopted it made me want to do music or write. So those two aren’t directly related but it’s tough to disconnect them. I think that when I started doing it, it wasn’t because I was adopted. But because I was doing it, it gave me an outlet to be able to talk about being adopted. It doesn’t necessarily directly correlate, but it’s tough to disconnect.

IAMAdoptee: You are pretty direct with titling a song “This Song is About Mental Health.” What is the message you hope to convey to your audience through this directness?

Dan: The name of the song actually was originally just called “Survival,” with all of the click behavior of the internet and just making it as direct as possible, which I think is actually important.  I changed the name of the song to “This Song is About Mental Health,” and I’m happy that I did that because I think more people discovered it, versus me being a lot more artistic with the way that I was trying to name the song. Sometimes you have to be as direct as possible.

IAMAdoptee: Are you someone who espouses therapy or counseling or have you figured out other ways to help yourself? It’s of course different for everyone, but we’re wondering what your thoughts are on this.

Dan: I guess it is different for everybody. I’ve never done therapy before but I’ve always thought about doing it. I would like to, but for me I think that writing definitely is helpful. When I am able to perform, that was extremely helpful. So I think that actually being unable to perform or have that as an outlet is kind of really impacting me. I guess being able to talk to as many people as possible I think is helpful. Maintaining relationships with friends and family I think has been really important and finding more people to talk [with] and communicate. Getting outside of my apartment where I live has been really important too. Just being around movement is extremely important for me.

IAMAdoptee: In general, adoptees are overly represented in accessing mental health services and are at higher risk for suicidal thoughts and depression. Do you connect with that characterization?

Dan: I think that even without seeing the stats or seeing the actual correlation between those, it’s tough to deny the fact that adoptees would be naturally in a place where those are things that we have to deal with. I think that by the nature of the way that we’ve been raised and the fact that we’re literally fish out of water, that we’re put between two different stressors the way we’re brought up, I think that that naturally relates and brings itself to providing a lot of mental health and wellness issues… and just kind of depressing thoughts. I would agree with those statistics. Does it impact me? One hundred percent. That’s why I think that having music as an outlet has been really important. Being able to write and being connected with people has been extremely important to me.

Dan: I do have a couple of songs that are about adoption, and I obviously want the broadest audience possible to listen to it, but it’s tough for me to deny that, as an adoptee, the experiences come from that background. So what I actually think is really amazing, what I really like, is that I do think that adoptees, even on the most shallow basis of seeing somebody that looks like them that’s making music that maybe they like, I think that’s important. It just reinforces that there’s people and things out there that represent us and that we can relate to. Even if they don’t necessarily like the music, that’s totally fine, but I think the more and more that we have representation, it is better for the community. Hopefully just the fact that it’s out there, maybe if it’s helping one person, then that’s incredible to me. That’s the whole purpose. Maybe there’s not necessarily a direct message that I’m trying to express to adoptees, but I think the fact that if they need something to represent them and this ultimately is hopefully one of those things. And that makes you feel really good.

IAMAdoptee: There’s not a whole lot of representation of Asians, Asian-Americans, and adoptees in the rap and hip-hop community. How have you dealt with that? Have you struggled at all with being underrepresented in that community or industry?

Dan: I would say that it hasn’t been an issue. Obviously it would be fun and amazing if there were more people within that community that were doing rap and hip-hop but I think that for me, it’s actually kind of exciting that I get to help tell those stories and that, selfishly, maybe I’m saying things that haven’t necessarily been put into words for the rap and hip-hop community. I like that feeling. Hopefully it inspires other people to get into it which is always a positive thing because, again, the more representation the better.

IAMAdoptee: Your early album launched as a you were going through a pretty intense period of self discovery in your adoption identity as an adoptee, a twin, and part of an intact birth family. Where do you feel you are in understanding all that has happened?

Dan: I’m still going through it. I think like for everybody, it’s an ongoing process of figuring stuff out. So for me, there’s definitely a lot of stuff to continue to process every single day. The honeymoon stage is over, so now it’s just like getting to know them which is nice because you kind of cut through the BS and now we just kind of exist. So it’s been ongoing conversations. There’s a lot of messages, which are nice, video calls, but it’s tough because not only is it a different culture, but it’s also we’re living in two different locations that are very drastically in different places. So it’s very much an ongoing process.

IAMAdoptee: If you don’t mind sharing, after so many years in reunion, what parts of the experience have been positive, what parts have been difficult, and what parts do you continue to grapple with today?

Dan: I think the main thing is the language barrier; is probably the most difficult thing. It’s on me. I need to learn the language. I think that’s something I drastically need to do, and just not being able to know the language makes it difficult to communicate, which means that I’m not really getting to know them. I don’t like that feeling. I think they want me to spend more time or be out there (in Korea) a lot more, and obviously it’s tough to be able to balance both of those different things. Hopefully things get better in the world in general. And all this COVID stuff isn’t making things easier. I’m not going to travel this year now. And I wanted to go back to Korea this year to go see them. That certainly is a big factor too.

Dan: It’s nice. I enjoy being involved in it. I guess my answer would be that I’m glad that I can chime in when I need to about transracial relationships and adoptee stuff because I think that that is a big part of our community. Hopefully with some of the people that I’m connected with, I can use my soft power to be able to influence them to hopefully have adoptees more represented or consider adoptees. I think that’s an important thing and hopefully being able to help them understand that side. I think it’s a big responsibility but I find a lot of joy out of it.

IAMAdoptee: Lastly, you were called upon to do the Crazy Rich Asians music video which is awesome. Of course you’ve created quite a few music videos, but was it like working with those folks and writing something that was so popular and important for the Asian-American community?

Dan: You know just to be clear, as much as I’d like to take credit in being able to say that I actually was involved directly with the film, I wasn’t directly involved with the film. I made a music video that was inspired by that theme. It was inspired by the movie but it wasn’t directly related to the film. But I have met a lot of the actors from that film. It’s very cool being tangentially involved and having people who have seen the song and movie and maybe they take away a different message from my version of the song.

Dan’s final words to us: “It means a lot that you want to chat with me about this stuff. Things are crazy in the world and there’s more important things to be talking about, so I appreciate you taking the time.”

To listen to Dan’s newest song, “This Song is About Mental Health” go to Spotify, iTunes, and YouTube channel.

Many thanks to Emma, Contributor, interviewer and editor for IAMAdoptee.