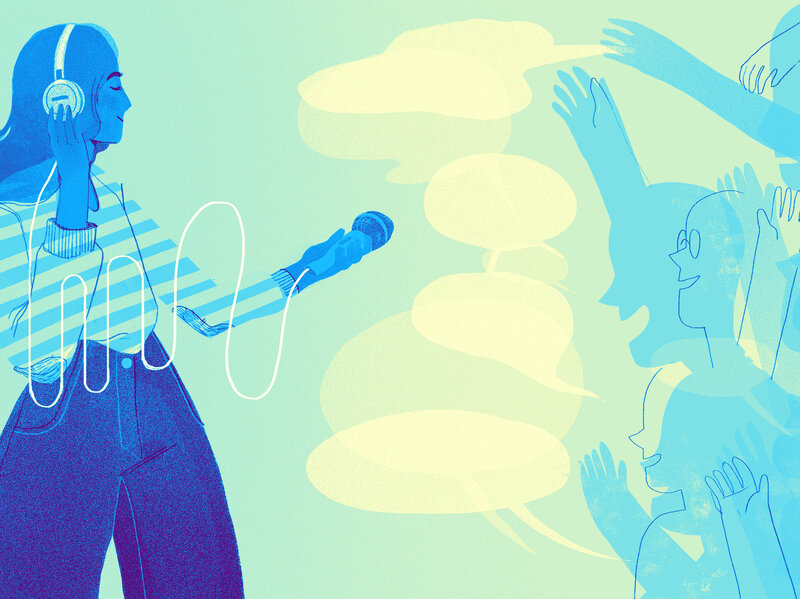 Anyone who looks a little — or a lot — different from their parents is used to being asked nosy questions: Whose kid are you? Where did you come from? Where do you belong?

Those questions can be even more pervasive when you don’t look like anyone in your community.

So is there anything parents can do to protect their kiddos (and themselves) from those grating interactions? This week, we’re exploring these questions on Ask Code Switch — and in the podcast.

My husband and I are white and we have one biological child (a baby) who shares many of our physical features. We also have a 4-year-old daughter, whom we adopted, who is black. I am trying to surround our daughter with a multiracial community so she is less this one black person in a sea of white. That is a struggle in a city that is still pretty segregated, but my particular question is this: Where should we go to church? We visited churches for a year when we moved to town, trying to find one that was racially and ethnically diverse, among a couple of other parameters we had. In the end, we settled on a congregation that is almost exclusively white, but it’s very uncomfortable to me to be raising my daughter in a church where we can identify ourselves as, “We’re that couple with the black daughter.” Should we go to a predominantly black church, even though it’s not in our comfort zone as far as worship style? Would that be pretending to be something we’re not as a family? Would we even be welcome there, or would we be intruding on a precious time for people of color to be in a safe space? Are there ways leaders of our church could make our congregation more welcoming to people of color? Half the time I’m tempted to just start my own congregation, because I can’t seem to find one that looks like my family, much less like the diverse world we live in.

It sounds like 50 years later, you’re seeing a pretty similar landscape. Even in large, diverse cities, congregations are often racially homogeneous. Short of driving three hours to Raleigh, it might be tough for you to find a diverse church.

It sounds from your letter like you’re probably living in a pretty white part of town, which means that your school district will be majority white. If many of the people in your extended family and social circles are white as well, there may be only one choice. You need to go to a black church.

Let’s explain. The first reason is your daughter. Studies have shown that children are able to pick up on racial difference as early as 15 months old, and by the time they’re between 3 and 5, they’re already starting to develop racial biases. Your daughter might not have the vocabulary to talk to you yet about what she’s experiencing, but if you’re uncomfortable being “the couple with the black daughter,” research suggests your daughter is uncomfortable being “the black daughter.”

And, no matter what you say to her about race, she’s going to be soaking up messages from what she sees, where she goes and who she’s around. I’m sure I don’t have to tell you — the way that black people are portrayed in popular media (when they’re portrayed at all) is not always the most affirming.

I spoke to Beth Hall, the executive director of PACT, An Adoption Alliance, an organization that serves interracial adoptive families. Hall also wrote a book, Inside Transracial Adoption, and she’s the white adoptive mother of a black son and a Latina daughter.

She says it’s extremely important for interracial adoptive families to foster intimate relationships with people who look like their kids. “And intimacy is, who do you eat dinner with? Who do you love? And who do you worship with?” she says.

Children are concrete thinkers, Hall adds, so if they’re surrounded by white people most of the time, they’re likely to reason that white people are the ones most worthy of love and trust:

Noelle, the second reason I think you should attend a black church is the rest of your family. You’re right, you might not always feel welcome in a black church. People will notice your presence, and there’s no guarantee that everyone will like it. (A couple of folks have suggested introducing yourself to the church leadership ahead of time and explaining your presence — it could go a long way toward ingratiating you to the community.)

But being somewhere where you’re noticed, looked at, maybe even judged sometimes may help you empathize with what your daughter will experience throughout her life. Remember, you get to go home to a community, and generally live, in a world where your racial identity is the norm. She doesn’t.

P.S. If you haven’t already, my teammate Gene Demby says check out NBC’s “This Is Us.”

Interracial adoptees and parents: We want to hear from you! What advice would you give Noelle? Hit us up at CodeSwitch@npr.org.

And as always, if you have a racial conundrum of your own, fill out this form and tell us the deets!