Find out more or let us know what we missed!

At IAMAdoptee, we know we are more than the culture of our adoptive homes.  20 years after the Motherland tours and culture camps were created, we are still seeking ways to connect with our birth culture through food, language, classes and trips.

Organizations that have developed tours for many different countries:

If you know of your local group or organization offering classes
workshops, or social opportunities, please let us know so we can post it:

To read on the purpose of this very significant bill:

We are excited to introduce the National Alliance for Adoptee Equality (NAAE), a network of community organizations coming together to strengthen advocacy and advance a legislative solution to citizenship inequalities among international adoptees.

Many intercountry adoptees lack citizenship despite having been adopted as children by American citizens. The Child Citizenship Act of 2000 automated the citizenship process and granted citizenship retroactively to adoptees who were affected—except for those who had reached 18 years before the enactment date. The abrupt transition of responsibility for naturalization placed many adoptees in legal limbo.

Citizenship and nationality are the fundamental human rights of all individuals. Families who come together through adoption deserve the same rights, privileges, and security as biological families. Adoptees should receive equal legal inheritances, including insurance benefits, family name, and other assumed family rights. Adoptees who were not naturalized by their parents deserve citizenship as they legally immigrated to the U.S. as children.

The purpose of the Alliance is to advance awareness and strengthen the voice for international adoptees whose rights are impaired. The alliance establishes a national network of organizations and individuals who are actively supporting the passage of the Adoptee Citizenship Act.

The NAAE is led by the Korean American Grassroots Conference, Adoptee Rights Campaign, and Holt International. KAGC is the largest nationwide network of Korean American voters and has advocated for this matter as part of its annual policy priorities since 2018. ARC is a leading advocate and represents a prominent number of impacted American adoptees. A pioneer in intercountry adoption, Holt International has advocated for adoptee citizenship rights for decades.

As a signatory of NAAE, your name or your organization’s name and profile will be part of our communication to Congress and media. Demonstrating strong national support is critical to achieving a solution to this important public policy. Thank you for your hard work and commitment to strengthening our community. We look forward to your partnership.

We encourage you to please contact your congressional representative if you would like them to support Citizenship for All Adoptees: HR 2731

It’s been 20 years since The First Gathering (™) of Adult Korean Adoptees, held in Washington DC.  IAMAdoptee has so much personal love for the first gathering. Founders Tom and Joy were members of Also-Known-As, the only adoptee organization invited to be on the planning committee for that event.  This pioneer event was the brainchild of Susan Soon-Keum Cox. With the financial support of Holt International in collaboration with the then Evan B. Donaldson Adoption Institute, Also-Known-As and the labor of many adoptees, it was the first time nearly 400 Korean adoptees from all over the world came together to connect, to share their experiences and for many to create a sense of community and family.  For the next couple of months, IAMAdoptee will be sharing interviews, photos and memories of participants who attended this pioneer event.

Before we get to the interviews of participants, IAMAdoptee is sharing the first survey completed by adult Korean adoptees of their lived experience of being adopted.  As a freshly minted social worker, Joy had the amazing opportunity to work at the EBD Adoption Institute and write this report. To be in and among the words of fellow adoptees continues to be an honor.  We hope you will take a few moments and read the full report and share with anyone curious about just what it means to be adopted, Korean and American. 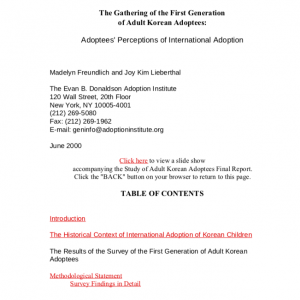 IAMAdoptee looks to provide the international adoptee community with information on what is going on in the world of adoption advocacy, research, policy and practice.

It has been over 20 years since the first group of international adoptees created organizations around the lived experience of being adopted. Hollee McGinnis, Founder of Also-Known-As, one of the oldest groups established and Joy Lieberthal Rho, one of the creators of IAMAdoptee spoke in 2016 on the already rich history of adoptee led organizations in the United States and Europe.  Below is the Powerpoint presentation with notes. 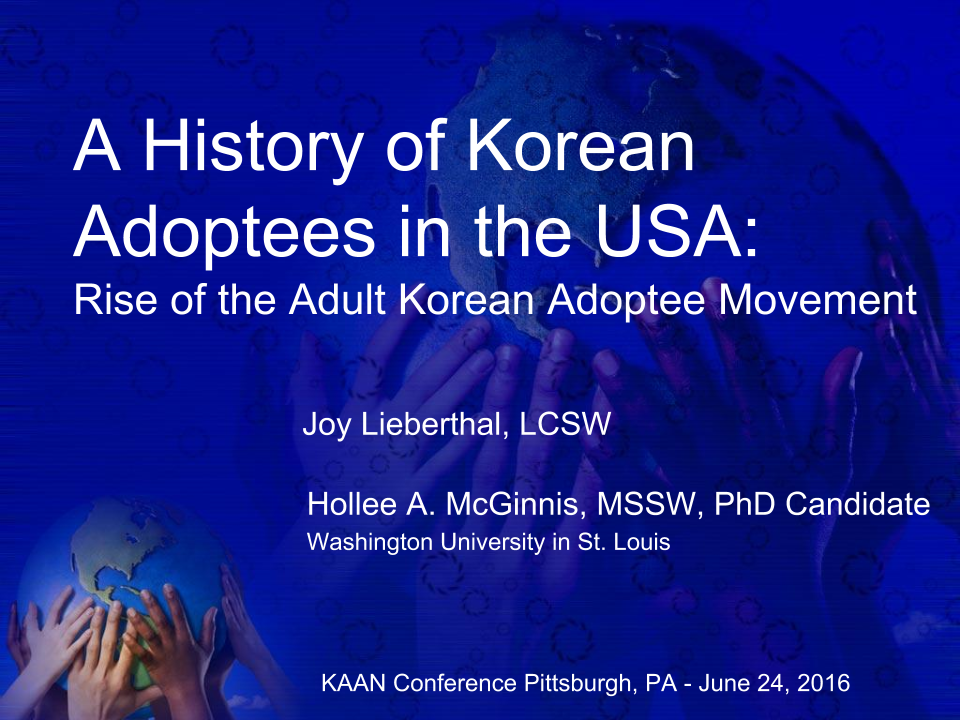 Ways to Give Back

IAMAdoptee is so impressed by the thousands of adoptees who serve our community in many different ways. Did you know that every adoptee run organization is run by the energy of volunteers? Have you thought about giving some of your time to younger adoptees?

IAMAdoptee is committed to supporting local adoptee led organizations. Let us know if we are missing any!

Here are some ways you can be a part of it all:

Be a Contributing Writer: