“What do you want to be when you grow up my love?,” I ask my little one.

He says without hesitation, “I want to be a father.”

Too often in adoption, we can be very birthmother centered, and I am guilty of that too.  She has been a presence almost all of my adult life.  The circumstances in which I was adopted whereby she no longer mothered me is a sad woeful tale of tradition, miscommunication and many, many years of heartache for her.  I saw her as the victim, the one who lost and the one who suffered.  It is easy to identify with someone lacking the power and means to find her lost daughter.

My birthfather on the other hand, turned down two opportunities to meet me and then died the year before I became a mother.  I never met him, have no photograph of him, do not know the sound of his voice.  I have had my moments of indignation and my moments of clarity that it was not about me at all.  Father’s Day has me always taking a pause and I find myself thinking of this man who is half of me and yet not.  How do I mourn or memorialize someone I don’t know?  How do I honor a man who I frankly thought very little about and thought very little of?  My birthmother has never disparaged him.  Not once has she spoken ill of him no matter how many times she retells the story of how we lost each other.  “He did not wish you harm,” she said.

I grew up believing he chose this adopted life for me.  I believed he wanted me to go away, perhaps for a better life.  I know now, he simply did not act and that I came to be adopted not because of a choice made, but rather a choice not made.  I do often wonder if he would be proud of me, whether he would be happy to know that I have a good life now.  I suppose we always want to be acknowledged by our parents, to validate our existence.

This would be the natural point where I would share then that I was fathered through adoption, but alas, plot twist.  There are some of us who have grown up, even in adoption, still seeking.  Still, in thinking about fathers, I do think that fathers in adoption get a bum rap at times.  Most of the adoption community is women, both in the profession and in the greater adoptee community.  I recall a moment when a male adoptee friend of mine came to a group, the girls were incredulous he was adopted.  After all, he was a boy.  And yet, whenever I speak in public or meet with parents in the privacy of a therapy session and a father is present, I think to myself, that child must be someone very special to have a father like him.  He has got to be pretty special too.  Once, when on the board of Also-Known-As, a non-profit in NY created by and for adoptees, we had our first and only adoptive parent join us, and he was an adoptive father.  We all came to adore this man, who so loved his daughter and so wanted to understand and give back to us.  He listened without judgment to our thoughts, our anger, our wish to be seen and heard.  He gave generously and has remained a friend to many of us as we become parents.

When we look for the individual good we find it.  To speak in generalities does no justice to the kindness we can receive.  No matter whether there was a choice or not in my adoption journey, I believe I have benefitted greatly.  Primarily because after all these years, I have found a man who embodies all that a father should be.  He married me.

In the 26 years we have been together, I have watched this man be a mentor to little ones, to run to hold babies, to be the one who is the only grown up in a room of kids teaching them a game, to being a father doting and fawning unabashedly over our two boys.  He rearranges his schedule to be home in time to coach, assist, feed, and support them and me.  He always finds a way to say yes and is loath to say no.  His only metric of a good week is if his family of four is home, connected, at peace, and have a reason to go out to celebrate something, anything!  In his fathering of my sons, I have come to learn what it means to be fathered too.  I thought I was just bearing witness but I too am protected, prioritized, given more yeses than nos.  I’ve been so narrowly looking for a measure of being mothered, I inadvertently obtained a father along the way. 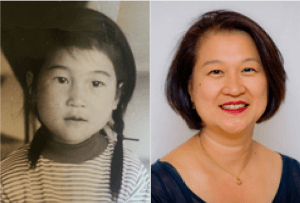 Joy Lieberthal Rho, LCSW is the co-founder of IAMAdoptee. Joy received her Master’s in Social Work from Columbia University.  She has been working in the field of adoption for 25 years professionally and through various volunteer organizations.
See more at About Us.